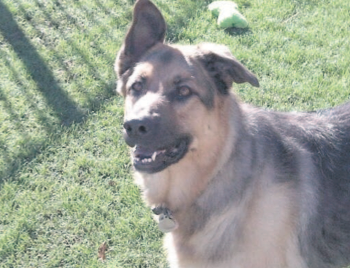 Since I was a child I have owned and cared for more than 40 pets, ranging from a tiny goldfish I won at a state fair to a World Champion Morgan horse named Raider. One of the most special of all my pets was a floppy-eared German Shepherd named Kayla. From the age of 6 weeks she was a partner in my pet care business.

From the start I knew Kayla was special. Even as a young puppy she generously shared her home, toys, treats, beds and backyard pool with all kinds of dogs. Every owner that came into my house to drop off their dogs commented about what a unique dog Kayla was — her kind, amber eyes gave her away.

But we didn’t realize what a true hero Kayla was until she was diagnosed with Grade 3 Lymphoma in May of 2011. The veterinarian told us that without chemotherapy Kayla would only live another three weeks. The cost for this treatment would be more than $6,000, but Kayla was only 7 years old. I was not prepared to let this special dog go.

Just two weeks before receiving the heart-wrenching news, a lively black German Shepherd puppy named Jordan had joined the pack. Kayla immediately took the puppy under her wing, teaching her to be generous and share with all the other dogs that come in and out of our home.

We were told that Kayla would need a series of treatments and her response to each treatment would determine the next move. Kayla responded differently to each treatment, needing to change the approach of the chemo treatment several times. But she bravely went through the ordeal and retained her friendly and generous attitude.

Kayla survived another six months — long enough to see Jordan grow into a friendly, well-behaved dog and Kayla continued as long as she could to play ball, swim and be the heart of Home Alone Pets. The day came when Kayla could no longer fight, but she succeeded to do what we asked of her … teach Jordan to be as special and unselfish as she was. I see things everyday in Jordan that reminds me of her.

People often ask if I would do it again. The answer is yes. Without a doubt, and in a heartbeat.